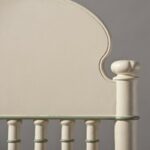 One of Louis Comfort Tiffany’s most complete design commissions for a residence was the Ayer Mansion, located on Commonwealth Avenue in Boston. For two decades, much of the private mansion was accessible to the public through the nonprofit organization, the Campaign for the Ayer Mansion. A recent sale of the building means this Tiffany treasure will no longer be enjoyed by the public.

Reflecting on his artistic career at a celebration of his 68th birthday in 1916, Louis Comfort Tiffany characterized his work across various media as a lifelong “quest of beauty.” Few artists have been as energetic or as successful as was Tiffany (1848–1933) in establishing that aesthetic ideal in the American home. Louis Comfort Tiffany’s Life and Art examines through art objects, archival documents, and artifacts Tiffany’s astonishingly diverse work in the decorative arts over the course of his lifetime. 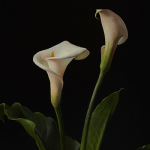 The Stebbins Collection: A Gift for the Morse Museum

The Stebbins Collection: A Gift for the Morse Museum introduces to the public for the first time a previously held private collection of seventy works of art by fifty-three artists. From paintings and sculpture to works on paper, the Stebbins Collection includes American masters from Thomas Moran (1837–1926) and Albert Bierstadt (1830–1902) to Thomas Eakins (1844–1916) and Fidelia Bridges (1834–1923). Assembled over the course of fifty-five years, the Stebbins Collection features artists of both great renown as well as many who have been largely forgotten. Each work of art, however, shares the common trait of presenting the artists at the height of their abilities. With particular strength in landscapes, as seen in the work of George Inness (1825–94) and Worthington Whittredge (1820–1910), and still lifes, exemplified through the paintings of George Cochran Lambdin (1830–96) and Martin Johnson Heade (1819–1904), the Stebbins Collection also offers superb watercolors by American Pre-Raphaelites such as Henry Roderick Newman (1843–1917) and Ellen Robbins (1828–1905). The Stebbins Collection complements the Morse’s wonderful collection of Tiffany’s work in all mediums, while broadening the Museum’s holdings of American paintings. 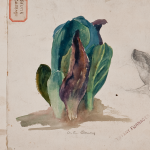 Louis Comfort Tiffany (1848–1933) employed many designers, but only a handful of these individuals were selected to work in the enamel department, which Tiffany Studios employees somewhat enviously referred to as “little Arcadia.” The artwork generated from this department ultimately took life in many vibrant and spontaneous studies that reflect the talent and artistry fostered in the small workshop focused solely on creating beauty. 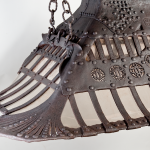 A newly acquired c. 1885 Tiffany iron fireplace hood from Laurelton Hall, Louis Comfort Tiffany’s celebrated Long Island home, enriches the Museum’s Laurelton Hall galleries that contain the largest repository of art and architectural objects from Tiffany’s legendary estate. Thought to be lost to the fire that consumed much of the estate in 1957, the fireplace hood was one of his most cherished objects. The hood was originally designed, fabricated, and installed at Tiffany’s Seventy-Second Street house in New York City. Around 1919, he had the fireplace hood removed and brought to Laurelton Hall. The Morse Museum’s installation of the massive fireplace hood, measuring over 66 inches tall and 55 inches wide, recalls its original setting in New York City. 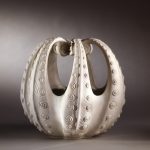 This exhibition provides a comprehensive look into the rare pottery of Louis Comfort Tiffany (1848–1933). Largely produced between 1900 and 1915, Tiffany’s art pottery was encouraged by the 1900 Paris Exposition Universelle and the reverberations of the Centennial International Exhibition of 1876 and ultimately defined by the artist’s never-ending experimentation. Complex glazing and unconventional forms distinguished Tiffany’s creations from the stylish pottery of the time. Only 2,000 pieces are thought to have been produced by Tiffany, and even fewer survive today. The Museum’s collection is the largest public collection of Tiffany pottery anywhere. 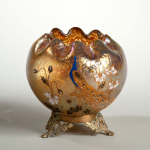 During the second half of the nineteenth century, iridescence—the optical light phenomenon natural to seashells, butterfly wings, and peacock feathers—captured the interest of glassmakers and potters in both Europe and America. The enthusiasm for mimicking these color-changing effects followed exciting discoveries of antique glass that had become iridescent after centuries of burial within mineral-rich soils. The premier decorative art studios of the West, notably Louis Comfort Tiffany’s firm in the United States and Glasfabrik Johann Loetz Witwe in Europe, developed chemical techniques to reproduce iridescent rainbow colors on par with nature. In this exhibition, the Museum celebrates iridescence through diverse examples from these and other companies of the era represented in its collection. 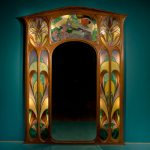 Art Nouveau from Europe and America

Art Nouveau—French for “new art”—arose almost simultaneously in Paris, London, Vienna, Munich, Milan, and Barcelona. Horrified by the cheap mass-produced goods typical of industrial production in the nineteenth century, artists set out not only to improve design but to make it modern. Stylistically Art Nouveau varied by region. Though the objects could include strong straight-line geometry, Art Nouveau was dominated by elegant curves and counter-curves, asymmetrical composition, and sinuous, sensuous line. Its focus was on nature generally and the female face and form particularly. This exhibition, assembled entirely from the Museum’s collection, includes fine examples of Art Nouveau from the hands and hearts of artists, designers, and artisans from Europe and America. 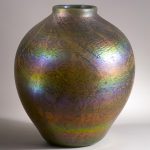 Tiffany Studios was arguably the most accomplished maker of art glass in the world in its day and undoubtedly one of the best of all time. In this new installation, the Morse presents examples of Tiffany art glass that richly illustrate the artist’s mastery of this medium. 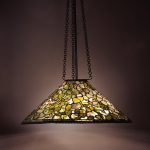 Lamps and Lighting—Tiffany and His Contemporaries

Although Louis Comfort Tiffany was an international success before his first lamp, his signature style of lighting has certainly extended the breadth and depth of his popularity across America and through time, from the 1890s to this day. With his lamps and lighting fixtures, Tiffany created a uniquely beautiful and clever look for illumination that captured the American and European audience and even now fascinates and charms people all over the world. 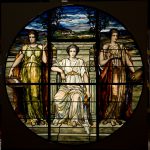 Revival & Reform—Eclecticism in the 19th-Century Environment

The Arts window, c. 1894, by J. & R. Lamb Studios is the centerpiece of this major new exhibition that illustrates the rich diversity of styles that made up the visual environment of the late 19th century in both Europe and America. Lamb Studios, a prominent American glasshouse of the era, exhibited the neoclassical window widely. In preparation for its debut at the Morse, the window, more than eight feet in diameter, underwent extensive conservation. The installation, organized from objects in the Museum’s collection, features about 20 additional leaded-glass windows and selections of art glass, pottery, and furniture, a number of which also have never been exhibited. Besides works by Lamb, windows on view—some avant-garde, others reviving styles of the past—include examples by Tiffany Studios, John LaFarge, Frank Lloyd Wright, Edward Burne-Jones, Donald MacDonald, and Heaton, Butler & Bayne. 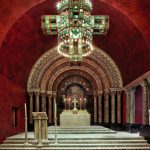 The celebrated chapel interior that Louis Comfort Tiffany created for exhibition at the 1893 World’s Columbian Exposition in Chicago opened as an exhibition at the Morse in April 1999, becoming available to the public for the first time in more than 100 years. The mosaic and glass masterpiece, a testament to his design genius, established Tiffany’s reputation internationally. 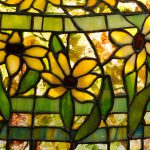 Through photographs, models, tools, and art objects, this teaching exhibit shows the range of Louis Comfort Tiffany’s glass production, from mosaics and molded-glass jewels to leaded-glass windows and lamps, providing insights into the techniques employed by his artisans.

This permanent gallery features about three dozen objects, including eleven pieces of jewelry that Tiffany designed for the new art jewelry division he established at Tiffany & Co. after his father died in 1902.