Jeannette grew up in the gracious Kenwood section of Chicago in the Richardson Romanesque-style mansion her grandfather had built and in 1912 gave to her mother as a birthday gift. It was richly detailed with stained-glass windows and carved mahogany cabinetry, and her artistic mother, Elizabeth Morse Genius (1872–1928), bought American Impressionist paintings, many in the Morse collection today, to hang on the walls. As with many wealthy families of the period, the Geniuses also collected Tiffany glass.

As a child, Jeannette visited Winter Park and had fond memories of Osceola Lodge, the home on Lake Osceola that her grandfather renovated and decorated in the Arts and Crafts style around 1905. It stands today a few blocks from the Morse Museum, exactly as it was when she visited in the early 1900s.

Jeannette was educated in private schools in Chicago, at Dana Hall in Wellesley, Massachusetts, and at Pine Manor Junior College in Chestnut Hill (later Wellesley). She studied art in New York at the Grand Central School of Art and Art Students League. Her teachers included abstract German painter Hans Hofmann, and a number of her early works reflect that influence. She continued painting throughout her life. Exhibitions of her work were held in New York and other such diverse venues as the Currier Museum of Art in Manchester, New Hampshire; the Butler Art Institute in Youngstown, Ohio; the Kunst Museum in Bern, Switzerland; the Royal Scottish Academy Galleries in Edinburgh, Scotland; and the Château de la Napoule in Mandelieu-la-Napoule, France.

While in New York, Jeannette worked as an interior designer. She was a longtime member of the American Society of Interior Designers, and she exhibited her art-inspired rooms from Palm Beach to New York. At the Morse, the interiors she built around the objects in the collection were known as vignettes. They are a tradition the Museum continues today.

Enrolling as a student in the 1926 summer session at Rollins, Jeannette began a lifelong interest in the Winter Park college. In 1936, at the age of 27, she was elected to her first three-year term on the Rollins College Board of Trustees, and then in 1942 she began 33 consecutive years of service as a trustee, retiring in 1975. During that time she quietly funded many college projects, including those to advance cultural and educational programs. In 1957, she created the Elizabeth Morse Genius Foundation to support her charitable concerns, including Rollins.

Jeannette founded the Morse Gallery of Art on the Rollins College campus in 1942 and named Hugh F. McKean, then a Rollins art professor, as its director. They married in 1945. Ten years later in 1955, she staged Works of Art by Louis Comfort Tiffany, an exhibition that was the first serious showing of Tiffany work since Tiffany’s death. For decades Tiffany’s creations had been looked upon as Victorian excess, but Jeannette, remembering the satiny, iridescent glass in her family home, still thought his work exceptionally elegant.

In 1957, the McKeans received word from one of Tiffany’s twin daughters that his Long Island estate, Laurelton Hall, had burned. Upon their visit to the ruins, her husband remembered Jeannette’s exact words at the scene of the devastation: “Let’s buy everything that is left and try to save it.” With that decision she was to create the nucleus of a collection that would grow into the most comprehensive collection of work by Louis Comfort Tiffany anywhere.

In addition to her service and benefactions to Rollins College and her careers as an artist and interior designer, Jeannette was a businesswoman.  She was the president of the Winter Park Land Co., which controlled much of her grandfather’s Winter Park holdings, and the founder and director of the Center Street Gallery. For all of her civic and cultural work on behalf of the community and state, she received many awards, among them the Florida governor’s first annual Award for the Arts in 1973. In 2000, in celebration of the turn of the century, the state honored Jeannette as one of a select group of “Great Floridians.” 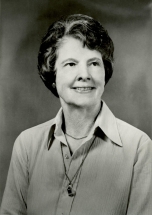