Tiffany was the president and art director, the primary figure driving all production— artistically and technically. Tiffany, of course, was the son of Charles Lewis Tiffany (1812–1902), founder of the successful and influential jewelry firm, Tiffany & Co. Louis Tiffany advanced his reputation by his own name and his father’s. Tiffany once reportedly stated: “Go after the money there is in art, but the art will be there just the same.”

These words are the sentiment of an artist who created a marketing machine, but who in the end allowed the artistic side to rule. Louis Tiffany’s financial backers, mainly his father, were called upon time and again to keep his companies solvent. His familial ties facilitated prominence at international expositions—a decided advantage for a young artist with big ambitions. His firms always exhibited aside Tiffany & Co. Louis Tiffany, therefore, was able to enhance the marketability of his own wares by capitalizing on the Tiffany name established by his father.

Louis Tiffany’s studio system was not a simple enterprise; he needed specialized workers to accomplish his goals. Under Tiffany’s watch, teams of talented designers and craftspeople translated his all-encompassing vision into the beautiful objects—blown-glass vases, leaded-glass windows and lamps, pottery, jewelry, and more—that captivated an era. He publicly credited a number of these individuals for their work. In the Synopsis of the Exhibit of the Tiffany Glass and Decorating Company from the World’s Columbian Exposition in 1893, for example—published by Tiffany Glass and Decorating Company and freely distributed—Will H. Low (1853–1932) and Lydia Emmet (1866–1952) are cited beneath pictures of their designs. Other important designers at Tiffany’s company included Frederick Wilson (1858–1932), Joseph Lauber (1855–1948), Edward P. Sperry (d. 1925), Agnes Fairchild Northrop (1857–1953), Alice Carmen Gouvy (1863–1924), and Clara Driscoll (1861–1944).

Neither Tiffany Studios nor the Tiffany companies preceding it were created to function as guilds where individual artists are equally recognized. They were designed in the historic tradition of studios that produced works under the name of an established artist.  Providing a portrait of Tiffany’s career, including his companies, is complicated. Scholars rely on surviving business records and personal accounts of individual employees to glean facts and insights. The discovery in the early 2000s of a trove of letters written by Clara Driscoll, a talented designer who supervised the Women’s Glass Cutting Department for Tiffany, has provided invaluable new information about aspects of production at Tiffany Studios. Still, one employee cannot tell the whole story.

Tiffany created his studios under a specific design theory—one based on his own ideals but under which he encouraged designers to interpret creatively.  In addition to his supervision, evidenced in signatures on designs and personal accounts of his visits out to the glasshouse in Corona, New York, he maintained a design file to provide inspiration for the designers. The files included photographs of works created early in his career, of historic monuments of personal interest to Tiffany, and of sights and objects from his travels. With these measures in place, Tiffany secured the unity and quality of overall production of his companies. 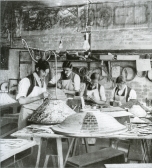