The exhibition features about 40 objects from the Morse Museum’s comprehensive Tiffany collection and is supported through a narrative of graphic panels that present biographical information and archival photographs. The show is organized into five major phases of Tiffany’s life. These include his early years as a painter; the decade in which he established himself as a decorator to New York’s upper class; his evolution as a master designer of both interiors and objects in the last decade of the 19th century; and the first years of the 20th century in which Tiffany’s business expanded, and he achieved status as an international star in the decorative arts. Finally, the exhibition addresses his years in retirement amidst the changing tastes of the time.

As a young man, Louis Tiffany, the privileged son of Tiffany & Co. founder Charles Lewis Tiffany, was drawn to art. When enrolled at Eagleswood Military Academy in New Jersey, he met and informally studied with the famous painter George Inness. Pursuing his passion for color and form in earnest, he was by the age of 19, a founder and member of the American Society of Painters in Water Color and a regular exhibitor at the National Academy of Design. Highlights from this section of the exhibition include an 1865 sketchbook produced by Tiffany on his first trip to Europe and a gouache study of an Arab man that Tiffany painted around 1873.

Though still active as a painter, Tiffany in his 30s made his mark as a leading New York designer/decorator. Already ensconced in an elite American art circle, Tiffany at this time also was seeking art patents for the type of glass and the glassmaking techniques he was using. In New York, commissions included the homes of chemical and drug magnate George Kemp and American statesman Hamilton Fish, the Lyceum Theatre and the Seventh Regiment Armory. Elsewhere, he created interiors for the White House, the Ponce de León Hotel in Florida (now Flagler College) and the Connecticut residence of writer Mark Twain. During this period, Tiffany collaborated as well with Stanford White on a grand house for the Tiffany family at Madison Avenue and 72nd Street in New York. From this period, the exhibition showcases the eggplant leaded-glass window from the George Kemp house, c. 1879; Tiffany’s sketch of the Madison Avenue home, c. 1883; and magnolia leaded-glass window panels, c. 1885, that were designed for his Madison Avenue residence and then eventually installed at his Long Island country estate, Laurelton Hall.

In his 40s and early 50s, Tiffany went on to become a heralded leader of the decorative arts of the time, creating a legacy that continues to be widely loved and admired more than a century later. In 1890, he would with Samuel Colman undertake one of the most prestigious and widely recognized commissions of his career, the New York home of prominent art patrons Louisine and Henry Havemeyer. Not long thereafter, he created the chapel interior for the 1893 World’s Columbian Exposition that won medals and accolades as well as the international favor he had long pursued. The chapel is on permanent exhibition at the Morse. Siegfried Bing, the French art dealer, became Tiffany’s chief representative in Europe. From this period, the exhibition features four pieces of Tiffany’s early work in blown glass and an example of a nautilus-shell lamp, which was exhibited in London as one of Tiffany’s earliest—and most innovative—leaded-glass lampshade designs. At the 1900 Exposition Universelle in Paris, Tiffany exhibited lamps, enamels, mosaics, art glass and windows, one of which was the celebrated Four Seasons from the Morse collection, and was awarded the Chevalier de l’Ordre National de la Légion d’honneur by the French government. Tiffany’s award certificate is part of the exhibition.

By the turn of the 20th century, Tiffany had clearly proved himself as both a world-class artistic talent and an effective manager and promoter. Despite earlier financial dependence on his father’s capital, Tiffany’s firm was now successful on its own. Tiffany’s father, however, died in 1902 leaving his son a fortune of more than $3 million. The same year, Tiffany turned his focus on a special project that would become arguably his greatest achievement—his country estate on Long Island, Laurelton Hall. Tiffany designed every aspect of the 600-acre estate. Objects on view from this period include five blown-glass vases produced for various important exhibitions and a Dragonfly & Water design lamp, c. 1910. In 1914, as the war that would change the world forever was escalating, Charles de Kay’s authorized biography The Art Work of Louis Comfort Tiffany was published. In the exhibition, the Morse presents a personally inscribed, gilt-metal bound copy of the book, which was a gift to Tiffany’s son, Charles.

Tiffany’s Quest at its Conclusion

Tiffany’s personal quest for beauty ended with his death in 1933, but only after his attempt to preserve his aesthetic ideals by establishing a foundation at Laurelton Hall. One highlight of this section is the invitation to his “Quest of Beauty” birthday breakfast at Tiffany Studios in 1916. Late in his life Tiffany created a permanent winter retreat in Miami. The house on Brickell Avenue, a prestigious address just south of the Miami River, was built between 1921 and 1923 and christened Comfort Lodge in tribute to his grandfather, Comfort Tiffany. 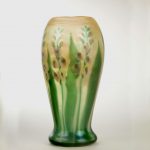 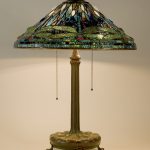 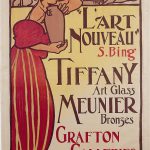 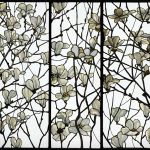 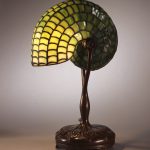 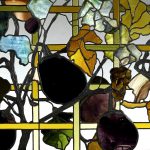