Design reform had begun with the Arts and Crafts movement in the 1850s. From this powerful movement, Art Nouveau rose like a rocket in the 1890s. The style spread rapidly throughout Europe and even to America before crashing less than twenty years later. Like Arts and Crafts, Art Nouveau is noted for its intention to both reform the decorative arts and to replace the eclectic result of the era’s revivalists with the simple principles of design unity, coherence, and integration—together referred to as “unity in design.”

Stylistically Art Nouveau varied by region. Though the objects could include strong straight-line geometry, Art Nouveau was dominated by elegant curves and counter-curves, asymmetrical composition, and sinuous, sensuous line. Its focus was on nature generally and the female face and form particularly.  While Arts and Crafts designers often looked to the Middle Ages for inspiration, Art Nouveau designers more frequently looked to the Rococo style of the eighteenth century. The American artist and designer Louis Comfort Tiffany (1848–1933), whose works are a strength of the Morse Museum’s collection, has often been associated with Art Nouveau. The production of Tiffany Studios extends across many categories, but it did include some wonderful Art Nouveau objects.

This exhibition, assembled entirely from the Museum’s collection, includes fine examples of Art Nouveau from the hands and hearts of artists, designers, and artisans from Europe and America. 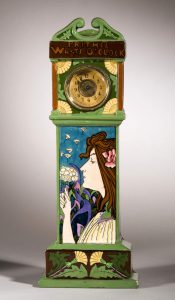 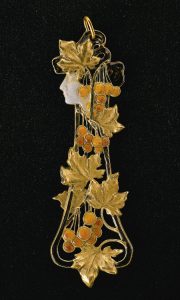