He was born in 1833 in St. Johnsbury Center, Vermont and joined E. & T. Fairbanks & Co. in 1850 at the age of 17. In 1865, Mr. Morse established the first branch of the business that was to become known as Fairbanks, Morse & Co. During the next three decades, Mr. Morse transformed a company whose primary product was scales into a diversified manufacturing firm that supplied a wide variety of the machinery that fueled the dramatic industrial growth of America in the late 19th- and early 20th-centuries.

Presses, trucks, railroad cars, motors (including the internal combustion engine), and other machinery and machine components came from Fairbanks, Morse & Co., making Charles Hosmer Morse a man of great wealth and a major factor in the nation’s development into a world power.

Like his counterparts of the period, Mr. Morse enjoyed a national perspective and invested over a wide spectrum. Having visited Winter Park, Florida, in the mid-1880s Mr. Morse selected this little town not only for investment but to become his winter home. Winter Park became his primary home following his retirement in 1915. (Learn more about his home, Osceola Lodge)

From the very beginning of his interest in Winter Park, Mr. Morse hoped future development would maintain the charm and grace he found in the town. In addition to insisting that the character of the town was more important than the profit to be made there, Mr. Morse quietly—and more often silently—set out to see his ideas realized.

He gave Winter Park its first town hall but adamantly refused to be acknowledged for it, even allowing credit to go to someone else. He donated Central Park to the town, but only so long as the town kept it a park. To this day, Central Park would revert to Mr. Morse’s heirs if the town used the property in any way other than for a public park.

Mr. Morse helped organize the Winter Park Country Club and leased the land to the club for one dollar per year. He donated other land and buildings to a variety of civic organizations, usually charging some token price to avoid the public flurry that would have come with a full donation. Organizations as diverse as the Women’s Christian Temperance Union, the Winter Park Woman’s Club, and Rollins College benefited greatly from his philanthropy.

Beyond pure altruism, Mr. Morse’s philanthropy had the very practical effect of ensuring the beauty, grace, and charm that Winter Park enjoys to this day. He died in Winter Park in 1921. 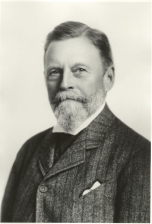