Morse purchased the Knowles cottage, just behind Osceola Lodge, in 1914 primarily to serve as a guest house. Today it houses the offices for the Winter Park Historical Association. Several other prominent Winter Park families owned the house, including the Robert L. Bigelow family, before and after the Morse family period of ownership. Morse made Osceola Lodge his permanent residence in 1915 and died there in 1921. His second wife, Helen Hart Piffard, whom he married in 1911, lived in the house until she died in 1929.

Morse’s granddaughter Jeannette Genius, who founded the Morse Museum, frequently accompanied her grandfather on his winter trips from Chicago to Winter Park and Osceola Lodge. She moved into the house in 1937. She and her husband, Hugh F. McKean, lived in the house for a few years beginning in 1947.

The Morse Foundation completed the exterior restoration of Osceola Lodge in the spring of 2006. The 12-month, $1.3 million project returned the house to its appearance at the time Morse renovated it around 1905 and stabilized its condition so that the house can stand for many more years as a memorial to Morse’s legacy. The project also included the restoration of the adjacent Knowles cottage.

The two buildings were stripped and repainted, the roofs replaced, windows and doors repaired, and deteriorated lumber identified and replaced—all in a manner that was true to the architecture of the respective houses and the style they represented. Although Osceola Lodge was painted white for years, it was determined by removing many layers of paint that the color of the house at the time of Morse’s residency was pale yellow with green shutters and trim. The asbestos shingles on the roof, also added at a later date, were replaced with cedar shingles of the type used in early 19th century. New window shutters were crafted based on historical photographs and an example found in the attic of Osceola Lodge.

Supervised by the preservation firm of Renker Eich Parks Architects of St. Petersburg, Florida, under the guidance of architect John Parks, the effort to be historically accurate was aided enormously by records available from the Morse Museum’s archives. These included photographs and a set of original specifications for the expansion that took place after Morse bought the house. There were also contractor notes and invoices from a renovation supervised in 1937 by Jeannette Genius McKean, which helped the architects positively identify the later alterations to the house. 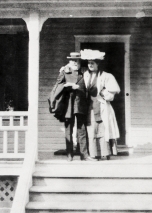