At the time it was built (1902–1905), Laurelton Hall was a departure from the French chateaux and Italian palaces that inspired so many of the large homes wealthy Americans of the period built. For inspiration, Tiffany turned, as he usually did, to the Orient rather than Europe. But, arguably, he also looked ahead toward the coming architectural revolution. The house itself presented a distinctly modern silhouette for the period. The basic underlying forms of the architecture were simple, straightforward, and often abstract. Yet on these relatively plain forms, Tiffany applied rich ornamental detail in glass mosaic, carved wood, and molded decoration in a unique blend of Asian and Middle Eastern sources. Contemporaries, including many leading architects, extolled Tiffany’s landscape design at Laurelton Hall. Set in rural grandeur with a towering view of Cold Spring Harbor, the estate was fashioned by Tiffany into complex, romantically picturesque gardens and woodlands in which ponds, tennis courts, and a bathing beach were nestled. Water from a spring-fed fountain in the reception hall was channeled through several more fountains outside as it wound its way down to the harbor.

Tiffany decorated the interior of the mansion with thousands of fascinating and unique objects he had collected from around the world. Many also were designed by him or others in his studios—furniture, lighting fixtures, windows, desk sets, and more. Notably, the vast collection on view included art glass, enamels, and pottery marked “A-Coll.” for “Artist’s Collection”—pieces Tiffany collected from the production of his own studio. Some of the objects were virtuoso performances in their respective mediums, special pieces Tiffany created to show his greatest capability. The Four Seasons window, for example, which Tiffany cut into four panels for the Laurelton Hall living room, won a gold medal at the Exposition Universelle in Paris in 1900 and inspired the French government to award Tiffany the Chevalier of the Legion of Honor. Other parts of the decor, including the Wisteria transoms that topped clear glass windows in the dining room overlooking the gardens, were stunning works that incorporated favored decorative motifs from nature that have become synonymous with Tiffany’s style.

In 1916, Tiffany installed the Chapel he had designed for the 1893 World’s Columbian Exposition in a specially constructed building at Laurelton Hall. Two years later, he converted an old farmhouse on the property to house an art gallery. Tiffany conceived of Laurelton Hall as a totally unified environment—a world that would not only be a home for him and his family, but also an art school, museum, studio, and retreat that would embody his philosophy of the primacy of beauty in human life. Tiffany intended Laurelton Hall, through this program, to advance his idea of beauty long after his death. To this end, he provided an endowment he hoped would ensure that his vision would be carried on forever. Sadly, the history of Laurelton Hall was to be different. Tiffany died in 1933. By 1946, financial reversals prompted the selling of the building’s contents at auction. The home itself was eventually sold and the property sub-divided. In 1957, a devastating fire gutted the long-abandoned house. Laurelton Hall now lies in ruins, with Tiffany’s dream for the estate buried in the rubble.

Many beautiful objects survived, however, to suggest something of Laurelton Hall’s former splendor. The largest group—including artwork, windows, furnishings, and ornaments—exists here in Winter Park because Hugh and Jeannette McKean, early admirers of Tiffany, purchased what they could for their collection at the Morse. 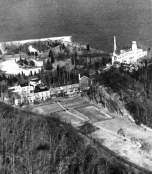 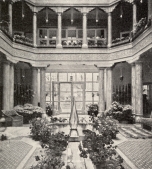