Born in Beaver Falls, Pennsylvania, McKean moved with his family to Orlando as a boy. He earned his bachelor’s degree from Rollins in 1930 and joined its faculty in 1932, later heading its art department. Continuing his education, he studied art at the Pennsylvania Academy of the Fine Arts in Philadelphia, Art Students League in New York City, the Ecole des Beaux-Arts at Fontainebleau in France, and Harvard University. In 1940, he received his master’s degree from Williams College in Williamstown, Massachusetts.

As a young painter in 1930, McKean was selected by the Tiffany Foundation to join other artists at Laurelton Hall, the exquisite, art-filled mansion built by Louis Comfort Tiffany at Cold Spring Harbor, Long Island. The artists worked there independently, with gentle critiques from Tiffany, who often invited them to join him for evenings of organ music in the grand Fountain Court.

The experience was to etch an impression so vivid that a half century later McKean could write about Tiffany the man, his art, and his period with a sense of immediacy in The “Lost” Treasures of Louis Comfort Tiffany (Doubleday, 1980). By that time McKean and his wife had built a Tiffany collection considered to be the most comprehensive in the world, and he could draw from it to show virtually every medium Tiffany explored.

McKean led Rollins as president from 1951 to 1969, then served as chancellor until 1973, and chairman of the Rollins Board of Trustees from 1969 to 1975. In 1942, Jeannette McKean appointed him as director of the Morse Gallery of Art, which she founded in her grandfather’s name on the Rollins campus. She and McKean were married in 1945.

Although his study of art was broad, McKean firmly believed throughout his life that art should be made accessible and understandable to everyone. As director, he wrote sensitive and often humorous labels to describe the work on exhibit at the Morse, sometimes shocking visitors accustomed to a more academic approach. But more often, his object labels delighted those who appreciated his refreshingly unique way of looking at art.

Outside of the Museum, the McKeans brought art to the Central Florida community in many imaginative ways. They started Christmas in the Park to bring music and art to families during the holiday season; they converted a van into the Morse Mobile Museum that travels to area schools without charge; and once, they staged a drive-by exhibit along Center Street in Winter Park to allow passengers to view Tiffany leaded-glass windows from their cars.

Hugh McKean’s civic, educational, cultural, and philanthropic contributions to the community and the state were reflected in his honorary degrees and service on foundations and boards of trustees. In 1961 he received a Doctor of Humanities from Stetson University; in 1963 a Doctor of Space Education from Brevard Engineering School (now Florida Institute of Technology); in 1970 a Doctor of Laws from the University of Tampa; and in 1972 a Doctor of Fine Arts from Rollins College.

The McKeans’ collection was built to allow others to enjoy and learn from art, and the couple always dreamed of a larger museum designed to exhibit it. While Hugh McKean did not live to see the 1995 opening of the new and expanded Morse Museum at 445 North Park Avenue, he was vitally involved in its design and its concept: to enrich the cultural life of the community and carry into the future the legacy of Charles Hosmer Morse and his granddaughter, Jeannette. 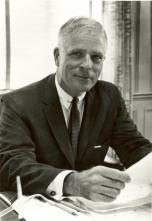