This group of reformers, passionately committed to righting the ills they saw in an increasingly industrialized and urban society, chose the arts as their medium. They were convinced that industrialization had degraded the work process and destroyed the environment, reducing the formerly creative craftsman to an anonymous laborer mindlessly repeating unfulfilling tasks. And they condemned the host of ornate, indiscriminately adopted revival styles—from Louis XIV to the Rococo Revival—that dominated the architecture and decorative arts of the Victorian period.

Arts and Crafts at the Morse

The Morse collection shows that Arts and Crafts movement production ranged from unique virtuoso pieces to factory-produced objects. What unites the works on view is their makers’ impulse for design reform: turning to nature for inspiration (rather than to styles from the past) and opposing not all industrial processes, but those that diminished human creativity. Arts and Crafts adherents passionately believed that objects made under these circumstances were morally superior and had the power to improve people’s lives, a conviction that still profoundly influences the way we judge good design today.

A Quest for Artistic Reform

These artistic reformers reasoned that if objects were again designed by the craftsperson and made by hand, “joy in labor” would be restored and shoddy work would disappear. Arts and Crafts practitioners favored solutions that had developed as a response to local climate and geography. By incorporating materials particular to an area and reflecting vernacular traditions, buildings were planned to fit into the landscape. In furniture, such as that by Gustav Stickley’s company, straight lines based on the structure of a piece replaced ornate curves, solid native woods took the place of imported veneers, and unnecessary decoration was rejected. The hope, never fully realized, was that such “simplification” would reduce the cost of products, making them accessible to a wide public.

The collections at the Morse Museum illustrate the goals of the Arts and Crafts movement—the revival of hand craftsmanship, the creation of more satisfying working conditions and the elevation of the decorative arts to the status of fine arts through design unity. In particular, the Morse’s important collection of American art pottery serves as a model for exploring both Arts and Crafts ideals and compromises.

The ceramics industry was one of the first to respond to the new demand for more individual, handmade objects. Potters such as George Ohr demonstrated the ideal that a craftsperson should control the entire design process from conception to finished product. He personally designed, threw, manipulated, and glazed his earthenware, but his work was not commercially viable. In contrast, at the successful Grueby Pottery, division of labor between throwing and decorating was the norm, and the vases were not one of a kind. Individuality was maintained by the fact that each piece was thrown (not made in a mold) and by the hand carving that allowed for variation in the prescribed patterns.

Louis Comfort Tiffany’s pottery was produced in molds but each piece was then finished by hand. The wide variety of glaze effects that could be achieved with a single form (bronze, crystalline, or matte; brilliant or subdued in color) are displayed in the gallery devoted to Tiffany pottery. Art Pottery production on the largest and most commercial scale was achieved at companies that added it as a line to their routine output.

Although the Fulper Pottery mostly manufactured utilitarian kitchenwares, in 1909 the company introduced the “Vasekraft” line for “artistic home furnishing.”

Women were the leaders in applying Arts and Crafts principles to social reform, creating many organizations to teach or market pottery and other media for philanthropic purposes.

Founded by settlement house patron Mrs. James J. Storrow, the Paul Revere Pottery grew out of the Saturday Evening Girls’ Club in Boston. The “S.E.G.” provided the daughters of Italian and Jewish immigrants with an alternative to factory work and an opportunity to earn money while receiving artistic instruction.

The emergence of new design schools afforded other opportunities for women, particularly at places such as Newcomb College in New Orleans, which had established a pottery to provide employment for young women who had trained in its art program. The Arts and Crafts commitment to decoration inspired by local plants and flowers is clearly seen in Newcomb pottery, where the primary motifs are magnolias, live oaks, hanging moss, and cypress trees.

Maria Longworth Nichols, a one-time amateur china painter from a wealthy family, founded Rookwood Pottery in 1880 in Cincinnati. It became the most renowned and successful art pottery in America. The ceramic historian Edwin Atlee Barber wrote in 1893: “The Rookwood Pottery was the first in this country to demonstrate the fact that a purely American product … can command the appreciation of the American public.” Nichols hired full-time decorators and in 1883, a business manager, who chose the shapes and decoration that were the most profitable and subsequently transformed Rookwood into a highly entrepreneurial art industry.

The decorators who were both men and women, were responsible for complete designs and each piece was uniquely decorated. Rookwood, however, like all large-scale Arts and Crafts manufactories, could not meet the Arts and Crafts ideal. Shapes were standardized and division of labor specialized. 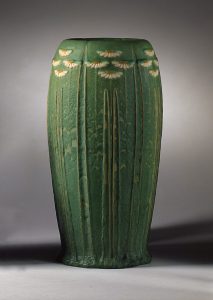