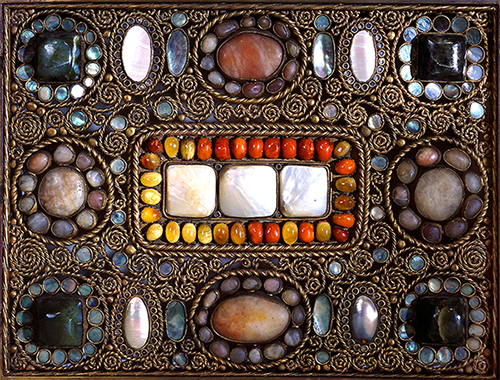 This tabernacle door, created around 1892 for the chapel Louis Comfort Tiffany (1848-1933) designed for the World’s Columbian Exposition, sparkles and glows with pieces of glass, natural shell, and stone. Its mosaic, however, is decidedly different than most of the mosaic-encrusted chapel interior since the door’s ensemble is interspersed with decorative wirework. The result is jewel-like and may explain why a picture of the door graced the cover of the publication The Jewelers’ Weekly in February 1916. Described as “being ornamented with a splendid display of large and small… stones arranged in groups of artistic patterns,” the tabernacle door took pride of place in the article along with the chapel’s altar front and reredos.

Inspiration for the design of the tabernacle door came from treasure bindings of the Medieval period. Books bound with precious metals inset with jewels were a luxury during the Middle Ages, and jeweled bindings became status symbols during the late-19th and early-20th centuries.

Additionally, the mosaic recalls specific objects from Tiffany’s interior decorating commissions and foreshadows his work in jewelry. The Havemeyer House (1890–92) contract awarded to Tiffany and Samuel Colman (1832–1920), for example, featured a firescreen and staircase balustrade with gilded curlicues of wire wrapped around pieces of opalescent glass. Later, Julia Munson (1875–1971), head of Tiffany’s art jewelry department from 1903 until 1914, used wirework around enamel and jewels in some of her designs for Louis C. Tiffany’s jewelry.