Born in Germany, Bierstadt came to the United States at the age of two. He grew up in New Bedford, Massachusetts, and became a drawing instructor before returning to Germany in 1853 for formal art training. In 1859, Bierstadt joined Frederick W. Lander’s survey expedition into the Rocky Mountains. His artistic response to the West’s raw and rugged beauty changed the course of his career. On his second journey in 1863, he visited California’s Yosemite Valley. Traveling by stagecoach and horseback, he made sketches and photographs. These inspired the large-scale canvases he constructed in the Tenth Street Studio Building in New York City and at his home in Irvington, New York. Bierstadt’s work introduced many Americans to the wild, soaring vistas of the western territories.

At the height of Bierstadt’s popularity, American financier LeGrand Lockwood (1820–72) commissioned The Domes for his new home in Norwalk, Connecticut. He paid $25,000. The painting is a panoramic view of the valley—including Yosemite Falls, the North Dome, and the Half Dome—from near Columbia Rock. As a painting, it is alluring and technically masterful—a three-dimensional illusion into which the viewer tumbles and falls amid a symphony of color and light. As a vision, it is sublime, epic in scale, forged of high drama and deep emotion. To stand in front of Bierstadt’s Domes is to witness the numinous. What nature created with soil, rock, trees, clouds, and stars, Bierstadt created with pigment and imagination. Bierstadt’s domes rivaled, if not surpassed, the real ones.

After Lockwood’s death, the painting was auctioned for $5,100 and shortly purchased for the same price by Horace Fairbanks (1820–88) of E. & T. Fairbanks & Company, a successful manufacturer of industrial scales, in St. Johnsbury. As a gift to his community, Fairbanks founded the St. Johnsbury Athenaeum in 1871, financed its building, and provided for its library and art collection. In 1873, he added the art gallery to accommodate The Domes, and it has been the pride of the collection ever since.

Charles Hosmer Morse (1833–1921), the industrialist and philanthropist for whom the Morse Museum is named, is a native of St. Johnsbury. Morse joined Fairbanks & Company in 1850, ultimately becoming the controlling partner in Fairbanks, Morse & Co. headquartered in Chicago. The Elizabeth Morse Genius Foundation in Winter Park made a substantial contribution to the Athenaeum’s Domes Project, which included the painting’s conservation. In restoring the painting to its former glory, ArtCare Conservation Studio in Miami repaired tears around the perimeter, flattened distortions, and removed surface grime and old varnish. 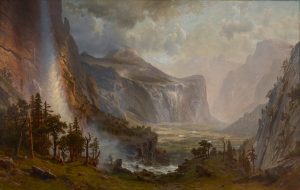 The Domes of the Yosemite, 1867
Oil on canvas
Albert Bierstadt, German-American, 1830–1902
Gift of Horace Fairbanks 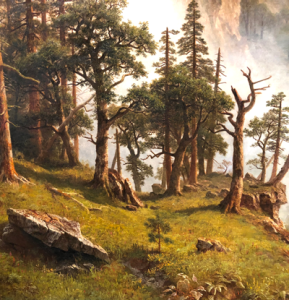 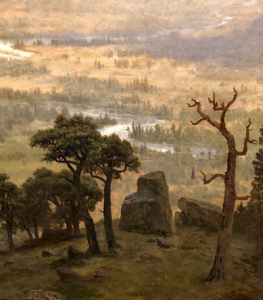