For her wedding in Chicago on October 12, 1905, she maintained a gift record book entitled “The Bride Elect.” The more than 250 items she documented provide insight into gift giving at the time, especially the kinds of gifts that wealthy consumers deemed worthy of a prominent and artistic Chicago bride. The entries in “The Bride Elect” include glass, pottery, silverware, textiles, books, family heirlooms, and bouquets of flowers. More than fifty gifts were bought from Marshall Field & Co., reflecting the cachet of the exclusive department store in its heyday. Almost twenty of the gifts were from Tiffany Studios—more than from any other maker. For this elite group of buyers, a Tiffany object was clearly synonymous with taste and style. Elizabeth, an amateur painter who received a degree in art from Wellesley College, displayed these objects throughout her new home, the Morse family’s twenty-room mansion that was itself a present from her father. Morse, president of the engine and scale manufacturing firm Fairbanks, Morse & Co., had hired architect Mifflin Emlen Bell (1847–1904) to design the home in the Richardsonian Romanesque style of the day. The house, completed in 1893, was located at 4804 Greenwood Avenue in the affluent district of Kenwood on Chicago’s South Side. It was filled with finely crafted custom-made furnishings that were also part of Morse’s wedding gift to Elizabeth. 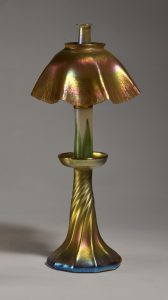