The power of this setting comes not only from de Forest’s artistic technique—color, light, brushstroke, and composition— but also from the viewer’s own imagination. For the audience of The Wreck, in both de Forest’s time and our own, the image of a desert unleashes potent thoughts and feelings deeply embedded in both the conscious and unconscious mind.

The Desert as Metaphor

As a subject of art, the desert simplifies the conditions of existence, reducing experience to its tragic essence—challenge, sacrifice, suffering, purification, revelation, and, finally, death. As in de Forest’s day, virtually everybody knows something of the many Bible stories in which the desert plays a central role. We are familiar too with the National Geographic-style photography of the Saharan sands—images that beckon with their calm stillness and which belie the desert’s true dangers. In literature, ranging from One Thousand and One Nights to “bodice-rippers,” the desert evokes romance and exotic adventure. Finally, the desert has acquired other important associations, even a mythical status, with such figures as T.E. Lawrence, aka Lawrence of Arabia.

By the late 1870s, many artists—including even the Impressionists, whose work defined the avant-garde in this period—were finding useful sources, images, and inspiration in what was then called the Orient. This broad geographical region included North Africa, the Middle East, as well as India, Japan, China, and the Far East generally.

De Forest and others in Europe and America painted pictures of Oriental sights that now constitute a major aspect of art of the period: Orientalism. De Forest explained his interest in North Africa and the East in terms of the specific qualities of light that were unique in those areas. It was on one his trips to Egypt that de Forest doubtless came upon the scene that inspired The Wreck.

De Forest made a fine oil sketch at the time, perhaps on site. In 1880, he developed his study into a large oil-on-canvas work, refining light, color, and most dramatically, the composition of the scene. In 1867, the French artist Gustave Guillaumet (1840–87) had produced a similar canvas with a dead camel. But for his picture, de Forest moved in closer to the subject, seducing the viewer into the scene and creating a more direct experience.

The larger context for The Wreck includes the longstanding tradition of desert settings in religious paintings. These subjects, notably St. Jerome and St. Francis in the desert, were widely recognized art historical references among American audiences. Also crucial for de Forest in conceiving this painting was the popular use of the sea as a setting for the great life-and-death themes of human existence. Well-known sea scenes included the 1819 painting Raft of the Medusa by Théodore Géricault (1791–1824) and American illustrations from the 1851 novel Moby Dick of Ahab’s struggle with the great white whale.

De Forest was a friend of Louis Comfort Tiffany’s (1848–1933) and played an important role along with the American painter Samuel Colman (1832–1920) and textile artist Candace Wheeler (1827–1923) in Tiffany’s decorating firm Associated Artists (1881–83). While in India, de Forest supplied Tiffany with carvings, jewelry, and other objects. When Tiffany closed Associated Artists in 1883, de Forest continued in his own decorating business, opening lavish Eastern-themed showrooms in New York City.

The Wreck was among de Forest’s most widely exhibited and best-known paintings. It was exhibited three times in 1880: at the National Academy of Design and The Century Association in New York City and at the Louisville Industrial Exhibition in Kentucky. In 1883, the painting was shown at the International Art Exhibition in Munich, Germany, and in 1891, The Century Association exhibited the painting again. De Forest hung The Wreck in the parlor of his Indian-style home at 7 East Tenth Street in New York City’s Washington Square. In 1915, de Forest moved to Santa Barbara, California, where he built another Indian-style house and pursued landscape painting. He continued to take on decorating commissions, wrote about his theories on art, art collectors, and collecting, and made at least one more trip to India before his death at age eighty-two. 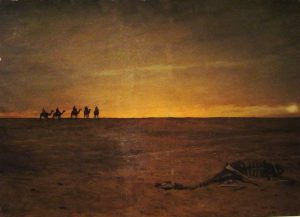