Tiffany’s first Daffodil lampshade appeared about 1900 as a heavily stylized and elaborate leaded-glass hanging shade. By 1903, the more naturalistic models had made their debut. Among them, the domed version became so popular that Tiffany Studios continued to offer it successfully for twenty years. Work ledgers from Tiffany Studios that would help determine production quantities for the Daffodil lampshades, and therefore popularity, have not survived. One extant order book, which chronicles sales from June 1921 through February 1924 indicates that the Daffodil style lampshades were almost 10 percent of orders. The lampshade showcasing Louis Comfort Tiffany’s favorite flower also appeared through the years in more variations than others.

The leaded-glass shade on the Morse Museum’s Daffodil lamp is its crowning artistic achievement. It is one of two versions of Model No. 1449—one with and one without a lattice—that were being sold by 1906. In the Museum’s lampshade, which has no lattice, the blooms spread over the curved mosaic organically. Some bow while others look upward toward an unseen sun. The leading serves both to define form like a penciled drawing and to give the shade its sturdy structure. The magnificently colored glass, with its range of yellows, ambers, and greens, allows just enough light through to make the glass glow and to define the various natural forms—the cups, petals, and stems of the daffodils.

In creating the mosaic shade, careful selection of the glass components was critical to the aesthetic success of the finished product. The Morse lampshade was designed by Clara Driscoll (1861–1944), who led the Women’s Glass Cutting Department at Tiffany Studios. She and other designers and artisans in her department—working under Louis Comfort Tiffany’s authority and direction—made the decisions on glass for the shade. They had to choose, for example, which mix of varied yellows and greens would yield the most natural looking blossoms and stems. This work, typically done by women, required good taste, a sensitive eye, and a steady hand. Each piece of the mosaic was cut from large, richly patterned sheets of opalescent glass.

The dome shade is supported by a bronze lamp base, a shape taken from the ceramic amphorae of antiquity. This was both a practical as well as an aesthetic matter. When the lamp was originally made, it was an oil lamp so a fuel reservoir was essential. Subsequently, the lamp was converted for electricity. Three delicate and graceful arms hold the rim of the shade in perfect symmetry about four inches from the base. The arms extend outward and upward from the body of the base suggesting anthropomorphically the arms of a human figure classically balancing a basket of daffodils on its head.

The daffodil, Narcissus amaryllidaceae, has been a source of fascination since antiquity and a fertile subject of folklore and poetry. Early flowering, daffodils are harbingers of spring and symbols of rebirth. A gift of daffodils suggests new love and constancy.

The flower, also called narcissus for its Latin genus, is native to southwest Europe and North Africa though it is now grown most everywhere. The name “daffodil” first appeared in the English language in the 16th century and is derived from asphodel, an Old World perennial with particularly poetic connotations. The white or yellow flower is a completely different plant genus from the narcissus, but “daffodil,” the popular term for asphodel, was misapplied to the narcissus genus for many years. Eventually the narcissus came to claim the name and also much of the asphodel’s lore. In The Odyssey, the Greek poet Homer writes of an asphodel-covered meadow where the souls of the dead wander. According to Greek myth, Persephone, the goddess of spring growth, is picking the flower when she is abducted by the underworld god Hades. Ancient Egyptian nobility were buried with daffodils to announce the afterlife.

Blooming before Easter, the Christian celebration of Jesus’ resurrection, the daffodil is sometimes referred to as the Lent lily. In the late Middle Ages, the flower appears in representations of the crucifixion.

Certain varieties of the narcissus have a darker association. In mythology, the hunter Narcissus is so profoundly taken with his handsome image reflected in a pool that he dies pining for it. The flower that springs up at the water’s edge in his place—its lovely head bowed in grief—bears his name and has been forever correlated with vanity and narcissism.

In the nineteenth century, the daffodil turned up in paintings by Pre-Raphaelite artists and others who provided visual interpretations of these famous mythological stories. So when Louis Comfort Tiffany became enamored of the daffodil, he joined a long list of its admirers.

For Tiffany, nature was a crucial source of inspiration for his creative expression. To this end, Tiffany collected innumerable books on flowers and horticulture. At his Long Island country estate, Laurelton Hall (built 1902–5), The American Midland Naturalist, a horticultural magazine of the time, noted that Tiffany planted at least two daffodil varieties, Narcissus poeticus and Narcissus pseudonarcissus. Tiffany’s daughter Comfort reported that her father reserved a special place for his daffodils at Laurelton Hall, planting them strategically in front of and amongst planted trees, shrubs, vines, and other flora. “One place,” she says in a poem written about the property, “he let run wild with daffodils. … The daffodils looked as if they had sprung up from the ground themselves, not touched by a human hand.” In fact, Tiffany planted fields of them. 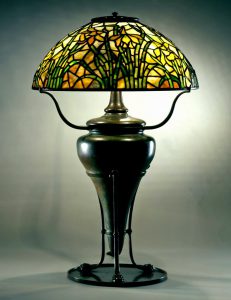 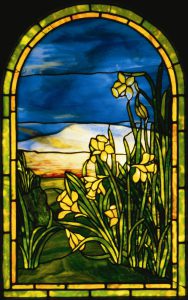 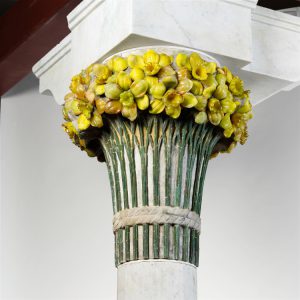