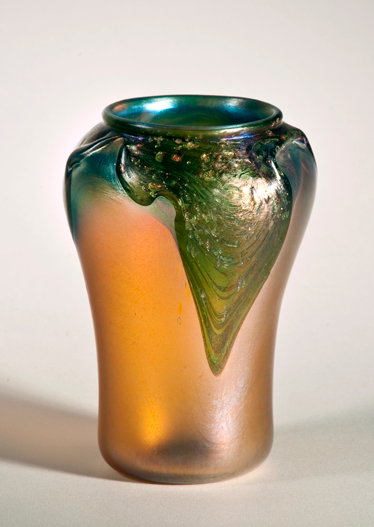 Louis Comfort Tiffany’s grand estate on Long Island, Laurelton Hall, was a showcase for art glass, enamels, and pottery that Tiffany collected from the production of his own studio. Marked “A-Coll” for “Artist’s Collection,” these objects were virtuoso performances in their respective mediums, the very best of Tiffany’s diverse creations. This blown-glass vase was among Tiffany’s treasured A-Coll pieces exhibited at Laurelton Hall. Acquired at auction in December, it is the first example of Tiffany’s Aventurine Lava glass in the Museum’s collection. The vase’s striking appearance has been achieved through a combination of different types of glass likely unique to this object. It features the lava-like draping of Aventurine glass over iridescent gold glass. The name Aventurine references the quartz-like glass with sparkling particles developed in Murano, Italy, in the 16th century. By 1910, about when this vase was made, Tiffany was planning the Louis Comfort Tiffany Foundation that would be housed at Laurelton Hall. He wanted the estate to be a museum dedicated to his singular aesthetic vision. When the foundation later changed its mission and relocated to New York City, many A-Coll pieces were auctioned in 1946 at Parke-Bernet. We are pleased to make this rare Aventurine Lava glass available for public appreciation. As yet one more found object from Laurelton Hall, it contributes to our expanding grasp of Tiffany’s genius.