The Enlightenment of Gramercy: Donald MacDonald’s Jeweled Glass - The Charles Hosmer Morse Museum of American Art
Skip to content
Back to Lectures & Talks

Thalheimer will discuss British-American glass artist Donald MacDonald, who created windows and a dome skylight about 1884 for the fashionable Gramercy Park home of former New York Governor Samuel Tilden, who was trying to best President Chester A. Arthur and his Tiffany-decorated White House.

For the past 19 years, Thalheimer has been interpreting the Museum’s collection while researching the life and art of Louis C. Tiffany. She lectures and writes on Tiffany and, more broadly, American decorative art. Thalheimer, who grew up on Long Island near the site of Tiffany’s estate, Laurelton Hall, earned a master’s degree from New York’s Parsons School of Design/Cooper-Hewitt Graduate Program in the History of Decorative Arts. She curated the Morse Museum’s 2011 exhibition, Louis Comfort Tiffany’s Laurelton Hall, in the 6,000 square foot addition to the Museum. Leading up to the Morse’s expansion, Thalheimer wrote for the exhibition catalog and oversaw the Morse’s collaboration on the 2006–7 exhibition Louis Comfort Tiffany and Laurelton Hall—An Artist’s Country Estate at the Metropolitan Museum of Art. She has also contributed essays regarding Tiffany to catalogs including the former Museum of Biblical Art’s exhibition Louis C. Tiffany and The Art of Devotion, Lafayette College’s Tiffany at Lafayette, and most recently, The Corning Museum of Glass’ Tiffany’s Glass Mosaics. Thalheimer’s ongoing project for the Morse Museum, The Louis Comfort Tiffany Chronology, is an online resource which centralizes documented facts of Tiffany’s life. 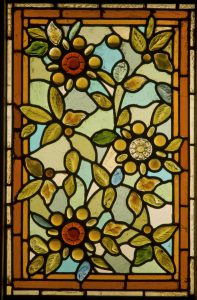